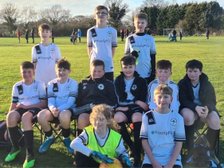 The Herne Bay Harrier's were back in action on Sunday the 30th of January on a morning the sun decided to show its face away to Whitstable Town.

Five minutes into the action and Archie T down left wing, got past 2 defender's and sidefooted across which hit the far post and came out to Josh I who finished into the open goal as the Harriers got off to a great start. Within a few minutes a penalty was awarded to Whitstable as no.7 finished into the top left corner to beat stand in goalkeeper Zeb. Kyle A hit a good shot wide from 20 yards ten minutes into proceedings as the Harriers looked to get back on top.

On thirteen minutes though the Harriers were back in front. Joe fought hard for a ball which he won on the right hand side, got past a defender and smacked the ball powerully straight at the keeper who couldn't stop the ball going over the line. Kyle A then hit a great cross which just evaded Joe, Archie T and the opposing goalkeeper. Kyle A putting a good shift in despite falling ill on the eve of the game and handing captain duties to Archie T in the absence of Josh F.

The half was drawing towards its close as Archie T corner hit a corner which Archie R missed from a few yards out, but the ball came back out towards the halfway line and Olly A just inside the Whitstable half and had a whack which looped up from all of 35-40 yards, the keeper got his hands to it but couldn't handle it and bounced into the net. It was a great moment for all to see as Olly A had his first goal of the season and was richly deserved! His celebrations showing how much he and everyone enjoyed that moment.

It was soon 4-1 just after as Joe down right hand side slipped the ball into Josh I who nipped Infront of keeper to prod home right on halftime withn great finish. A good first half from the boys as they settled into the game as the half wore on.

Riley W who was on at half time had a shot saved not once, but twice as the ball went out for a corner. The corner was whipped in from the left hand side by Riley W and somehow found its way all the way in at the back post. A second incredible goal. All of this inside the first five minutes of the second half to make it 5-1.
Within five minutes after that Archie T slalomed past 2 and unselfishly set up Riley L for a finish into the bottom corner to make it 6. Five minutes later an Archie T corner fell straight to Riley W at the back post to score on the half volley to make it 7th heaven for the Harriers as he capped a good display with his second goal.

Not to be kept quiet Zeb save made a good save from a powerful shot which he then followed up to punch clear and with the ball coming in he then caught with aplomb. A special word must go to Zeb who put his hands forward, quite literally, to be the goalkeeper for the day as Josh F was unavailable.

An Archie R cross come shot was then saved by the keeper and Joe hit it in from a few yards into empty net on fifty five minutes as the Harriers were looking to get their shots off. Adam having a crack which was well saved just after.
Olly L who was so composed throughout the day won the ball on the halfway line and went past 3 before having a shot just wide the right hand post a few minutes after the eighth goal. A real bright performance from Olly L. Epitomised after he made a last ditch tackle as Whistable broke in the last few minutes. The last action of the game came as Archie T who had dropped into defence late on, won a tackle and sprinted up towards the halfway line and played a perfectly timed ball for Josh I to run through in the Whistable half and finished with a low driven finish in the bottom corner for the last kick of the game to complete his hattrick! A comple performance from lil Josh I. That's the how the game ended with 9 of the best.

It was a very good performance by everyone, special mention must go to Zeb for going in goal. Everyone played really well much to the delight of coaches Ben and Steve! Onto the next